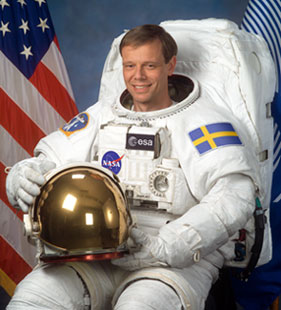 Christer Fuglesang Photos with the courtesy of NASA/JPL

Little did I know when I started the project two years ago, that it would become one of the highlights in my life. But let me take it from the beginning. I started my HAM voyage 26 years ago with the callsign ON7EV. Like many of us, I have always been fascinated by all things mechanical and electrical to the point that I became an electronical engineer and from there stepped over to become an airline pilot. I do remember seeing the first man on the moon as an eight year old and the sounds and pictures made an ever lasting impression on me.

Let’s fast forward to 2002, year when I put up my little antenna tower (100+ feet) in the backyard. I was perfectly happy for 2 years until city hall decided otherwise by telling me I needed a building permit. In the legal intermezzo which followed, I had the opportunity to present to a city hall official what Ham radio was all about. To emphasize this was a serious hobby; I mentioned that even the ISS had a ham radio station permanently mounted on board. This aroused the city hall official’s interest and before I knew it, I had told him I would arrange for a contact between the ISS and the local school. Boy, I definitely did not know what I was getting into! I had been having all my fun on short wave and the little dabbling I had had with satellites were with the old RS 10/11 satellites. But, being a Ham, one is never too old to learn so up came some more antennas and experiments were started using old Oscar-7 in both mode A and mode B. I was learning real fast the art of tracking and tuning two radios and antenna controllers with only two hands. And I had fun!

At the same time, I contacted the local school and hit upon a teacher in physics, Thomas Nordlöv who, upon hearing of the ARISS project, immediately realized the potential it had. So we filled in the ARISS application and the idea hit me: Imagine if we could have our QSO with Christer Fuglesang. First Swedish Astronaut, First ARISS QSO with Scandinavia, First ARISS QSO with Sweden! The media exposure would be tremendous and the impact on the children would be in par with what the first moonwalk was to me. So that’s how that came to be.

We worked hard for two years, and even got the kids to send in some drawings to be launched together with SuitSat. It was tough at times since the support from teachers at the school was not always the best. Thomas spirit never dwindled though and neither did mine. In one way, I can understand what the other teachers must have thought. Picture this: A guy comes in and tells them that he can work so that their school will be the only school in the world whose student will talk to the first Swedish astronaut when he’ll be in space. They must have thought: ”Yeah….Right…!”

Anyway, we just kept working towards our goal. New problems kept popping up all the time and we kept resolving them. Slowly, the far fetched dream was becoming reality and the one to a million odds got better and better. And then we got the go ahead from the ARISS team and NASA. The date was December 17th 2006..

I had taken Two weeks vacation starting from the launch date of STS-116 so I could spend all my time on the task at hand. Two days prior to our scheduled contact, I barely slept 4 hours a night. There was still so much to do. There was only Thomas and I running the show. I got a company to lend me two of their 5 square meter projector screens and a parent of one of the students had a contact so we could get hold of a pair of professional computer projectors. A few calls to my Scout leader colleagues and I had a team of helpers. There were of course a few amateurs included.

10:00 z. Time to start installing everything in the sport complex which could take about 1000 people. The projectors where mounted on the wall. Up came the 2 grey giant glass projector screens. As we were adjusting one of the screens, a shout:” Look out”. Time came to a standstill as one of the screens came crashing down in a horrible noise of breaking parts. I swear my hart stopped beating. There was a complete silence for 5 seconds and then I think I said something which I censor here. The time was 12:30 z, five and a half hours away from show time. Regaining my composure, I called my wife Helena with what must have been a rather brusque order: ”Come here with all the white bed sheets you got”. It is kind of funny thinking back because she was talking about some sheets which she didn’t want to bring because they didn’t look that nice… I wanted all of them (I guess we men don’t care about cosmetic looks…).  Anyway, we finally made a new giant screen out of our bed sheets and it worked fine. At 16:30z. we where ready.  Just in time for the opening of the doors to the public! The show could begin.

One minute to AOS, the room got very quiet. You could hear a pin drop. Shane, VK4KHZ made a single call to NA1SS who replied immediately! The audio was crisp and clear. People were standing in awe. Go ahead Sweden. Moa Corse from 5th grade asked her question in Swedish with a concentrated tight look on her face, The calm and friendly Swedish voice of Astronaut Christer Fuglesang came through the speaker, ”Hello Moa”. Moa’s tight face relaxed into a very happy excited smile when she heard Christer answering her question. 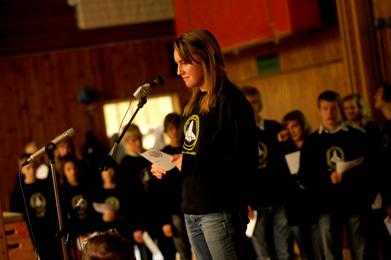 As for me, I just heard the voice talking but never really heard what he was saying. I was so focused on getting the children in their position and giving them the go ahead for their question. It went extremely well. Just before LOS occurred, Christer said ”OVER” I am pretty sure that I managed to squeeze in a deafening applause from the audience.  After that, I remained on the stage in front of 500 people, numerous reporters, TV and radio stations, all eyes fixed upon me. When Gaston finally dropped the Telebridge line, I remained silent for a second and then I screamed:” YES”, my fist pumping the air. The public exploded in cheers and applauses. Photoflashes where going off all over the place and I turned towards Thomas, hugged him and kept saying ”We did it, amazing, we did it!” 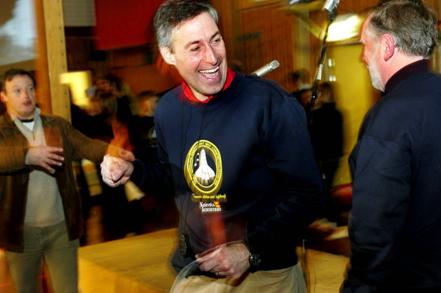 It is now December 19th and I am slowly drifting back to earth. This has been an amazing experience. The kids will never forget this; I can see it in their eyes! A special bond unites them Thomas and I. It was definitely worth two years of my life! 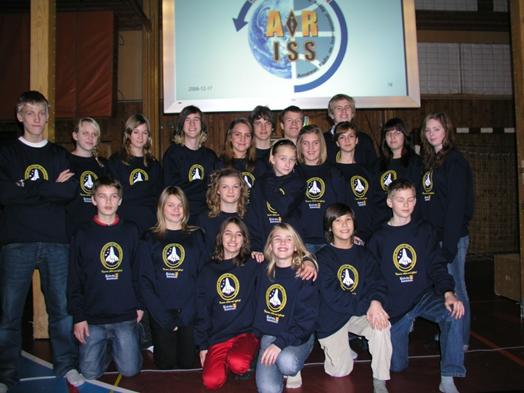 73, a Merry Christmas and a Happy New Year

Webmaster and member of the AMSAT-SM steering group.