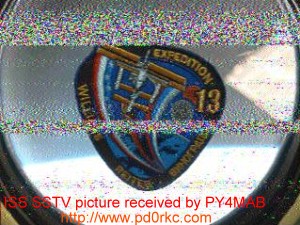 NOTE: We all await SSTV to become a regular part of Ham Radio on the ISS.

As reported recently, ISS Expedition 13 Commander Pavel Vinogradov activated the SSTV project for few orbits from the International Space Station. Pavel sent several manual test images from ISS to Earth to prove that the basic SSTV configuration has been set up correctly. The SSTV system was then shut down until the crew can spend more time to finalize the cable connections and configure the system for Slide Show mode.

The slide show mode will allow the crew to preload a directory full of images that will be automatically transmitted to Earth. The crew will not need to keep pushing a button to send images. In theory the system can run for weeks at a time without crew involvement. The SSTV configuration parameters are now ready to be uploaded to the ISS. The next phase of testing may use the frequency 145.800 MHz FM for the SSTV down link. Radio Amateurs should also check the testing frequency of 144.490 in case it remains active. The Slide Show mode will only be testing these downlink frequencies. The uplink frequency will not be published.

[ANS thanks Miles, WF1F for the above information]

The ARRL reports that a test of the ARISS SSTV system aboard the International Space Station may be conducted over Russia the weekend of July 29th. This news was released by the ARRL Amateur Radio News, July 26, 2006. Expedition 13 Commander Pavel Vinogradov, RV3BS is expected to test the SSTV system over Moscow using the downlink frequency of 144.49 MHz. All amateurs within range are encouraged to receive the FM broadcast. More details are on-line at:

http://www.arrl.org/?artid=6627.Those of us in other parts of the world eagerly await further testing of the amateur radio SSTV system and look forward to receiving pictures from the ISS. Cor, PD0RKC reports on his Space Station Ham Radio Info Site (http://www.pd0rkc.com) that PY4MAB received a SSTV picture from the ISS when it was over Brazil on Friday, July 28 at 19:00 UTC.

This testing may be very limited. It is not known when the Project will be officially opened to the worldwide public. The tentative down link for SSTV will be on 144.490 FM. The uplink will not be published until testing has been completed.

Additional information about the SSTV system can be found on the MAREX-MG site at: http://www.marexmg.org/. Do not try to send images up to ISS at this time.

[ANS thanks Miles, WF1F, Cor, PD0RKC, ARRL and ARISS for the above information]